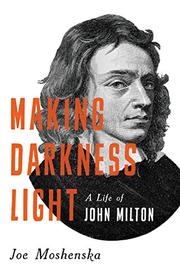 A Life of John Milton

A prismatic portrait of the canonical poet.

Oxford literature professor Moshenska takes a fresh perspective on John Milton (1608-1674), the art of biography, and the experience of reading to create a lyrical, meditative narrative about a poet who has seemed to generations of biographers and readers to be “perennially contemporary.” It’s not possible, Moshenska writes, “to separate the place of Milton’s writings in his lifetime from the questionings and imaginings that they can provoke in ours.” The author has been haunted by Milton, entangled with him as a reader and teacher, and his captivating, perceptive study reveals a deeply felt connection. Dividing the biography into three parts, the author considers Milton’s birth and early life, marked by his growing up in “a house full of music” that, Moshenska believes, made him particularly sensitive to rhythm; his experiences in his late 20s and early 30s, including a “formative and fraught” trip to Italy and meeting with the aged Galileo; and the latter half of his life, when he married, became a father, and emerged as a controversial public figure. At this point, “he presented himself as a learned, urbane, and respectable poet” whose writings on divorce “could make women leave their husbands” and whose political views “threatened the bonds between monarchs and subjects.” Moshenska follows Milton’s footsteps from his birthplace on Bread Street in London to his travels through Italy; visits Milton’s several homes; offers meticulously close, sensitive readings of poems and essays; and reveals “granular details” of turbulent 17th-century English political and religious life. Throughout, the author shares his own intimate responses to Milton’s sometimes “alien and challenging” views. Milton, he writes, “was able to be absolutely himself while remaining in some sense foreign to himself, and this strange kind of self-relation I have found rich and useful in making sense of myself.” With no aspirations to produce a definitive biography, Moshenska has crafted, instead, an incisive portrayal.