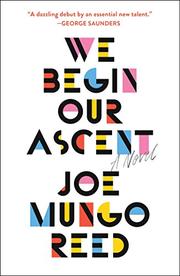 WE BEGIN OUR ASCENT

Cycling, family life, illegal substances—Reed twines them all together in his exceptional debut.

Our narrator, Solomon, is a professional cyclist racing in the Tour de France. His wife, Liz, is a research biologist with an “interest in adaptive theory.” They are both ambitious, devotedly searching for “a right way to do things, a sense of control.” But Sol is not racing to win; his job is “to get our team leader, Fabrice, across the twenty-one stages of this tour in as little time as possible.” To properly perform this job, and to remain competitive against their likewise unscrupulous rivals, Sol and his teammates dope—a practice Sol uneasily supports: “I am no fan of the danger of the process, but when I consider the way the team has got into me—altered my chemistry to my own advantage—I am grateful.” The novel unfolds over several days midtour. Sol’s team has a bit of good luck, and a lot of bad, and eventually Liz, who’s driving in from England to watch the race’s later stages, is drawn into the doping scheme…then further into it, then further. “Just one little thing more,” she says. Reed’s first novel lives squarely within Don DeLillo’s sphere of influence. In addition to their mutual preoccupation with systems—the systems we live beneath, the systems we design for ourselves—Reed shares with DeLillo certain aspects of pacing, voice, and character: Sol’s wryly thoughtful narration is reminiscent of Jack Gladney’s in White Noise; Rafael, the team’s coercive and brilliantly rendered directeur sportif, could be a relative of Gladney's friend Murray Jay Siskind. But Reed relies more heavily on plot than DeLillo, and the effect is remarkably successful: Alongside the ideas and the jokes, there is real suspense and human drama. Reed shows us the allure of conducting our “days...not for their own sake but for the light that will be cast back upon them by success”—and then he shows us how awful this method of living can be when things go wrong. “We are doing all this for a bicycle race?”

Fast and smart, funny and sad, this is an outstanding sports novel, and Reed is an author to watch.