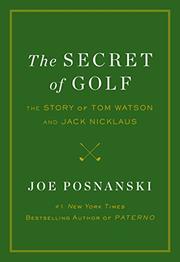 THE SECRET OF GOLF

The Story of Tom Watson and Jack Nicklaus

An award-winning sports journalist charts the careers of and competition between Watson (the younger) and Nicklaus (the elder) as they dominated golf in the 1970s and beyond.

NBC Sports national columnist Posnanski (Paterno, 2012, etc.) scored numerous interviews with his principals over the years, but his text leans more toward the story of Watson; hovering nearby—always—is Nicklaus, whom the author declares golf’s greatest player. The author organizes the text into 18 “holes” (chapters), each of which is followed by a brief advice chapter—a sort of golfer’s guide to the game. These chapters have titles like “Play with Purpose.” Most feature Watson’s facile commentary and seem to have wandered onto Posnanski’s fairway like duffers in search of their lost balls. The principal interest here is in, well, the principals. We learn a lot about Watson: his difficult father (who never did like a shot his son hit); his obsessive, relentless practicing; his unsurpassed putting (a skill he lost later on); his right-wing politics; his bouts with alcohol when his career began to fade; his psychological makeup. We also learn about Nicklaus, though in less detail. The author reminds us of the Bear’s early-career weight problems, for example, and demonstrates the adaptations he made to his game as he aged. The golf-course battles between the two are among the highlights. Posnanski is at his best when narrating events, at his weakest when waxing philosophical. Occasionally, he clutches at cliché. “The fans were frenzied, the air felt electric,” he writes of the 1977 British Open battle between the two at Turnberry, a classic duel whose highlights readers can now revisit on YouTube. The author ends with Watson’s near-win of the Open in 2009.

Some stellar shots, a few slices and hooks, and a couple putts that hang on the lip.