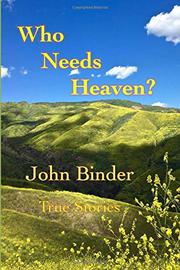 A memoir offers vignettes from an entire lifetime.

In his latest work of nonfiction, Binder looks back on his life and renders several incidents and themes in a series of autobiographical stories. The author has led a picaresque life, with many adventures and crises, and he’s inserted many of these escapades into the entertaining, touching, and often enlightening tales arranged in these pages. He takes readers back to his childhood, painting affectionate portraits of the many people who influenced him while he was growing up. Binder includes a particularly memorable remembrance of his mother, who was felled by a serious stroke that robbed her of her speech (“Visiting her in the human warehouse they call a hospital, I’d point to letters of the alphabet printed on a card and she would blink to spell the word she wanted to convey”). He also gives readers a captivating, behind-the-scenes look at the famous child evangelist Marjoe Gortner. Binder worked on the crew that produced the Academy Award–winning 1972 documentary about Gortner’s illusion-dispelling revival tour, in which he exposed the deceits of his childhood ministry. The author watched all of this up close and relates it with enthusiasm and sympathy. (Sometimes a touch too much sympathy, since at one point even Binder seems convinced by the enthusiasm of the crowd: “I don’t believe in magic, nor do I believe in God, but I do believe in miracles. I witnessed one.”) Whether he’s recalling partying with Kris Kristofferson and Willie Nelson in Las Brisas, Texas, or recounting the fracas he and his partner got into in 1966 at the Albany Convention Center when Sen. Robert F. Kennedy was speaking (“Reporters grabbed at our feet trying to trip us up and bring us down. They failed. I was exhilarated”), the author has clearly told most of these tales many times in his life. These written versions are fine-tuned to perfection and provide a large and constantly moving banquet of intriguing moments.

A fast-paced and boisterously readable assemblage of true stories.