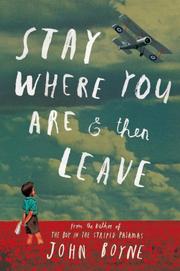 STAY WHERE YOU ARE AND THEN LEAVE

Another child’s-eye view of war from the author of The Boy in the Striped Pajamas (2006); here the child is working-class, the conflict, World War I.

The fighting starts July 28, 1914, the day Alfie Summerfield turns 5. Eager to defend king and country, young men—including Alfie’s dad, Georgie—enlist in droves, leaving wives to manage households and families. Everyone says it will be over by Christmas, but four years later, the war grinds on, having transformed Alfie’s stable, working-class neighborhood beyond recognition. Czech-immigrant neighbors have been taken away, their candy shop boarded up. Released from jail, a conscientious objector and old family friend is reviled and beaten when he returns home. Georgie’s letters stop coming. Alfie’s mother, now a nurse, insists he’s on a secret government mission, but Alfie fears he’s dead. Hard times get harder. Skipping school to shine shoes at King’s Cross railway station, Alfie learns Georgie’s hospitalized with shell shock and vows to bring him home. Alfie’s the novel’s strong suit: self-centered, altruistic, schooled by years of war, yet clinging to the belief that he can control the uncontrollable. His authenticity lends credibility to the sometimes–far-fetched, coincidence-heavy plot. (Conversely, a didactic tone creeps in when the viewpoint shifts from Alfie.)

A vivid, accessible tale of the staggering price war exacts from those who had no voice in waging it.