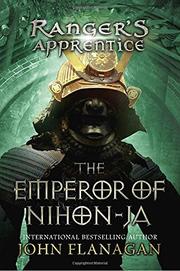 From the Ranger's Apprentice series, volume 10

The 10th and final full-length episode in an alternate-Earth series that's just about reached its sell-by date unites the five members of the central cast in yet another rescue mission to a distant land. This time its a thinly disguised medieval Japan, where bluff young warrior Horace has been swept up in the entourage accompanying a kindly emperor who is on the run from a vicious usurper. Thanks to a sequence of massive coincidences, he is soon joined in a remote mountain fortress by Rangers Will (who graduated from "apprentice" about five volumes ago) and his crusty mentor Halt, plus temperamental Princess Evanlyn and her spunky frenemy Alyss. While the usurper and his forces obligingly winter nearby, the menfolk train a peasant army for the true emperor while Evanlyn and Alyss set out to recruit more allies and have an air-clearing heart-to-heart about who really loves whom. By the end battles are won, bad guys slain, feasts held and everyone heads home for weddings and further adventures. The "keep it simple" approach has served Flanagan—and readers who prefer predictable plots and easily recognizable settings and character types—well, but the formula has staled. "The Final Battle" blazoned on the cover indicates a recognition of this fact, though loose ends leave open the possibility of further, as-yet-unplanned developments. Here's hoping a break will restore zing to future adventures. (Fantasy. 11-13)