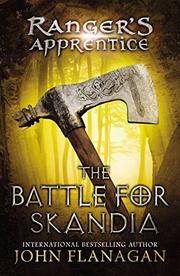 THE BATTLE FOR SKANDIA

From the Ranger's Apprentice series, volume 4

Taking up where the previous episode, Icebound Land (2007), left off, the latest chapter in this unusually well-founded heroic fantasy reunites the four central characters—then sends them back into the hands of the (Viking-like) Skandians to defend these erstwhile enemies against an invading army of (Mongol-like) Temujai. As before, Flanagan expertly juggles the overall plot line, in which the four struggle with confusion because they’re not sure how or what they feel about each other, with a logically constructed campaign that culminates in a hard, suspenseful battle. The author wears his influences on his sleeve but he wears them well, and like Tamora Pierce shows a knack for crafting adolescent warriors and mentors that never go stale, however long the haul may be. Readers who hate tales that end in cliffhangers will also appreciate the definite (though probably deceptive) feeling of resolution at the close. (Fantasy. 11-13)