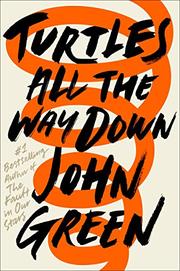 TURTLES ALL THE WAY DOWN

Aza Holmes doesn’t feel like herself. But “if half the cells inside of you are not you, doesn’t that challenge the whole notion of me as a singular pronoun…?” When a local billionaire—and the father of her childhood friend, a white boy named Davis—disappears, Aza (who seems to be white) and her BFF, Daisy Ramirez (who is cued as Latina), plot to find him and claim the reward, amid rumors of corruption and an underexplored side plot about semi-immortal reptiles. The story revolves around anxious Aza’s dissociation from her body and life. Daisy chatters about Star Wars fan fiction (and calls Aza “Holmesy” ad nauseam), and Davis monologues about astronomy, while Aza obsesses over infection, the ever present, self-inflicted wound on her finger, and whether she’s “just a deeply flawed line of reasoning.” The thin but neatly constructed plot feels a bit like an excuse for Green to flex his philosophical muscles; teenagers questioning the mysteries of consciousness can identify with Aza, while others might wish that something—anything—really happens. The exploration of Aza’s life-threatening compulsions will resonate deeply with some, titillate others, and possibly trigger those in between.

Aza would claim that opinions about this book are unfairly influenced by “the gut-brain informational cycle,” which makes it hard to say what anyone else will think—but this is the new John Green; people will read this, or not, regardless of someone else’s gut flora.