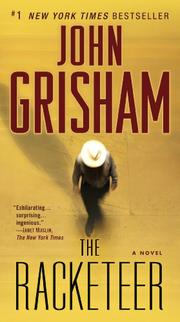 “Secrets are extremely hard to keep in prison, especially when outsiders appear and start asking questions.” So writes Grisham in the voice of one Malcolm Bannister, a one-time attorney who has gotten himself in trouble and is now “halfway through a ten-year sentence handed down by a weak and sanctimonious federal judge in Washington, D.C.” Grisham locates his story on the familiar ground of the racial divide: Bannister, 43 years old, is black, the only black ex-attorney at the Maryland prison camp to which he has been committed—not a bad place, a “resort” in fact as compared to most pens. And, of course, he’s innocent, or so he protests. Bannister also has come by some inside knowledge of events surrounding the death of another federal judge, which links to witness protection, drugs, Jamaicans and some heavy bad guys—and therein lies Grisham’s longish, complex tale of cat and mouse. Every character in the book is believable, and though some of the plot turns seem just a touch improbable, the reader never quite knows whether things are going to work out for Bannister before the heaviest of the heavies quiets him down for good. “I have a plan,” Bannister says, “but so much of it is beyond my control.” That’s not so of Grisham’s plot, which is carefully mapped out without seeming pat, leading to a most satisfying conclusion.

In fact, there are plenty of surprises along the way. As ever, a solid, unflashy performance by Grisham.