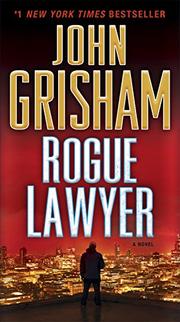 Another by-the-numbers legal procedural, at once gritty and lethargic, by longtime practitioner Grisham (Gray Mountain, 2014, etc.).

“There are plenty of people who’d like to kill me right now,” grumbles Sebastian Rudd, the rogue lawyer in question. He carries a gun, works out of his car, and sleeps in a different hotel room every week, precisely because he runs up against so many bad guys who mean him harm. Some of them are cops. Why? Because Sebastian, though jaded and cynical, as literary lawyers are required to be, apparently still believes in justice, for which reason, accompanied by a bodyguard named Partner (“a hulking, heavily armed guy who wears black suits and takes me everywhere”), he finds himself in a podunk burg where a client is fighting for his life against the charge that he’s brutally murdered two little girls in a spectacularly gruesome crime. Natch, spectacular gruesomeness being another sine qua non for the bestselling crime novel. Indirection and misdirection abound, with lots of talky exposition, the requisite maverick-y norm-flouting (“At this precise moment, I am violating the rules of ethics and perhaps a criminal statute as well”), and the usual sarcastic world-weariness (“The jurors don’t believe any of this because they have known for some time that Gardy was a member of a satanic cult with a history of sexual perversion”). All this is to be expected in a genre bound by convention as tightly as our perp bound the ankles of his victims, but the reader can see most of the mystery coming from a long way off, making the yarn less effective than most. And the clichés pile on a bit too thickly, from the large-breasted moll to the bored judge who dozes at the bench.

One wonders if Grisham weren’t sleeping through some of this as well. Whatever the case, one of his lesser cases.