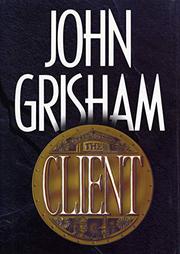 Grisham's latest opens with a neat hook into the reader's jaw- -and the tension never wavers—as the author strives for a knockout suspenser with echoes of Mark Twain and Robert Louis Stevenson—or at least the reader can't help weighing what he's reading against the darker plots that enmesh Huck Finn and Jim Hawkins. Instead of pirates, though, 11-year-old Mark Sway is thrown among lawyers and murderers. Mark, a great follower of L.A. Law, becomes "the client" after he witnesses the suicide of a drunken Mafia lawyer. Before the lawyer dies, he tries to take Mark with him, holding the boy prisoner while the Cadillac they sit in fills with carbon dioxide. As he's fading, the lawyer reveals to Mark the whereabouts of the body of a Louisiana senator. The senator was murdered by Mafia thug Barry "the Blade" Muldanno, then buried under concrete in the lawyer's garage. Mark escapes death but now holds a secret so deadly that Barry the Blade is ready to waste him. He's also wanted by the feds because Barry's going on trial for the senator's murder—but there's no body, and so the feds have a weak case. Mark retains 52-year-old Reggie Love, an abused divorcÇe, to help him keep shut about the body's whereabouts. If it's known that he knows—and the hoods and feds suspect him mightily—he and his family will never have a safe moment again. The story is set in Memphis, then moves to New Orleans, but both backgrounds are sketchy. The strongest scene features three mildly funny goons in the middle of the night trying to...well, enough. Mark is too smart by half, rather than wise like Huck; dialogue slips into exposition; and Grisham goes for the tear ducts at tale's end, but presses too hard. None of this matters. In the movie, the obligatory face-out between Barry the Blade and Mark will take place, bet on it, though Grisham avoids the confrontation.