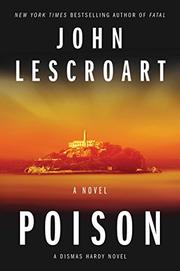 Back in the saddle after a brief hiatus for the stand-alone Fatal (2017), San Francisco attorney Dismas Hardy spends most of his time wishing he weren’t. And he’s not the only one.

Half a generation ago, Hardy represented Abby Jarvis when her drunken driving got her charged with vehicular homicide. She did her time, got out of prison, and landed a job as bookkeeper with Grant Wagner, who owned Pipes & Valves plumbing supply. Now Wagner has died, and the cause wasn’t the heart attack it first seemed to his family—sons Gary and Gene, daughters Grace and Gloria—but aconite poisoning, which a tox screen Gloria requested finally caught. The younger Wagners can’t believe Abby could have killed the man who gave her a second chance, but neither can they believe the killer is one of their number, and somebody has to take the rap. So Abby once more calls Hardy, who takes the case for peanuts and then watches the pile of evidence against his client grow and grow. The defense’s only hope, it seems, is that the case will somehow turn out to be linked to the shooting of David Chang that leads off the story but feels like an extra limb. And eventually it is, though not in an especially ingenious or revealing or persuasive way. By that time, though, Hardy’s own son Vincent’s friendship with Chang has Hardy’s wife, Frannie, demanding that her husband walk away from the case, and when he thinks back over the times his friends and relatives have been scalded by the violent crimes he deals with (The Fall, 2015, etc.), he can see that she has a point. Now if only there were a way to get Abby off before the deadline for Hardy’s decision came due….

Though it lacks both the sociological scope and the double-barreled plotting of Lescroart’s best, this relatively routine, expertly handled case is still well worth your time.