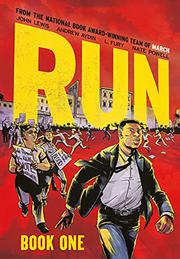 A companion to the award-winning, groundbreaking March graphic memoir series, this is the final work completed by Congressman Lewis before his death in July 2020.

What happened after the 1965 marches in Selma? Although segregation was no longer legal, America had not yet embraced true equality. Shortly after the passage of the Voting Rights Act of 1965, a six-day uprising took place in the neighborhood of Watts in Los Angeles, with similar protests in Chicago. (Readers will likely note parallels between these events and the 2020 protests.) With welcome frankness, Lewis recounts his tenure as chairman of the Student Nonviolent Coordinating Committee, being at odds with organizations like the NAACP and the Urban League, the repercussions of SNCC’s public stances against the Vietnam War and apartheid in South Africa, and the generational divide within SNCC. Lewis questioned his own effectiveness as a leader (and was eventually ousted), but his focus throughout the book is on the hundreds of unsung individuals who undertook the sometimes-deadly work that Black voter registration and other grassroots social justice efforts demanded. Compelling art perfectly captures the tension and terror of these troubled times, as told from Lewis’ memory with the backing of scholarly works and research.

An intimate, powerfully revealing look at a crucial, complex time, through the eyes of a true American hero.