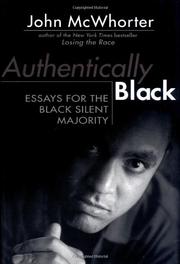 Essays for the Black Silent Majority

Rousing essays on the nature of being African-American today and a dissection of currents the author of Losing the Race (2000) finds self-defeating.

Racism is not the greatest problem facing black people, writes McWhorter (Linguistics/Berkeley); even systemic racism is a surmountable obstacle that for the majority of African-Americans has been surmounted. The problem in the black community is a double consciousness in which “the ‘authentic’ black person stresses personal initiative and strength in private, but dutifully takes on the mantle of victimhood as a public face.” This collection of nine articles, most previously published, extends the arguments McWhorter made in Losing the Race: African-Americans must give up the “seductive drug” of holding whites accountable for every perceived problem in the community; avoid welfare and demand opportunities for self-realization, not charity and handouts; fight their unacknowledged “sense that at the end of the day, black people are inferior to whites . . . an internalization of the contempt that the dominant class once held for us.” Achievement comes from within, whatever life's imperfections, asserts McWhorter, but to pigeonhole him as a neo-conservative would be a mistake (though his use of the term “silent majority” in the subtitle encourages it). He is too freethinking, too likely to cite Malcolm X or W.E.B. Du Bois. His takes on racial profiling and slavery reparations are middle-of-the-road and reform-minded. His suggestions that diversity can be a mere tokenism will ruffle only a few feathers, although comments like “usually there is a transition period during which people on both sides of the divide rue the impending ‘death of their culture’ . . . but mixture wins out in the end” ought to get his critics jumping for their pens. His own critique of Cornel West's move to Princeton is little more than posturing and beard-pulling.

As intended, McWhorter raises hackles as he challenges received opinions and entrenched notions.