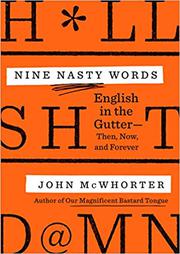 English in the Gutter: Then, Now, and Forever

A prominent linguist probes the most transgressive words in English.

The power of profanity is obvious, but the sources of its power aren’t as easy to account for. Why is one combination of sounds taboo and not another? Why don’t damn and hell have the same ring today that they did in the past? Is there one N-word, or are there two? To answer such questions, McWhorter, the author of Our Magnificent Bastard Tongue, Words on the Move, and other notable works, does what linguists do: He teases out “structure in what seems like chaos, mess, or the trivial.” The book is a systematic treatment of cursing that combines historical analyses of the evolution of usage, etymologies, linguistic tables, and amusing anecdotes. It’s distinctive McWhorter, dense yet breezy, jumping from one reference to another. A characteristic passage reads, “Yoga moms, not just sailors, are covered in tattoos. Toddlers ask for edamame and pad thai instead of Spaghettios. Hell becomes a scalar particle. Language, like life, is this.” Setting aside fashion and food, much of McWhorter's analysis is grounded in music, film, and stage, the histories of which he seemingly knows as well as language. It makes for a delightful style when you don’t have to stop to look up a reference, and alongside the pizzazz is real substance. Take the author’s macro observation about what is considered a curse, shifting from the religious sphere (damn) to the physical (shit) to where they are now most charged, in the sociological and ethnic arenas. This trajectory is not accidental. “For Americans of this post-countercultural cohort [Gen X],” McWhorter writes, “the pox on matters of God and the body seemed quaint beyond discussion, while a pox on matters of slurring groups seemed urgent beyond discussion. The N-word euphemism was an organic outcome.” The book is replete with such insights.

A lively and informative study, not to mention wonderful cocktail party material.