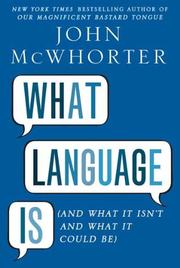 Linguist and New Republic contributing editor McWhorter (Linguistics and Western Civilization/Columbia Univ.; Our Magnificent Bastard Tongue: The Untold History of English, 2008, etc.) returns with a discussion of what languages are, and some insightful thoughts about why we view some as “primitive” and others as “advanced.”

The author employs a jumping-bean style that briskly leaps from frisky allusions to popular culture—not always recent: Wilt Chamberlain and Warren Beatty appear in one sentence—to dense descriptions of the complexities of language. Throughout, the author uses what he calls the “underwater approach” to language analysis, noting how early scientific illustrations of marine life showed critters dried and displayed on a beach; not until we could stay underwater for extended periods could we describe these creatures in their own habitat. Linguists offer a similar view of language. Observing that any language is a “fecund, redolent buzzing mess of a thing,” McWhorter groups his observations under five headings—languages are ingrown, disheveled, intricate, oral and mixed. The author dispels many common misconceptions, among them the notion that languages spoken by isolated peoples are simple or primitive. On the contrary, the more isolated a language, the more complex it becomes, as native speakers add numerous layers of special-purpose features. It’s only when other, non-native adults arrive that the language begins to simplify. He notes, for instance, the enormous complexity of Navajo (and, yes, he deals with the code talkers). He also reminds us that spoken languages antedate by millennia any written language and quips that all languages are “sluts,” taking on the attributes of all comers. McWhorter also dismisses the notion that Black English is Africa-born but recognizes the dialect’s dignity, calling it “a different kind of English but not a lesser one.”

Turgid at times, but mostly eye-opening, even liberating.