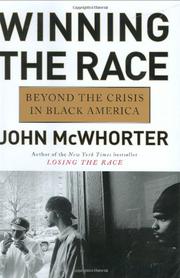 Beyond the Crisis in Black America

Why do African-Americans continue to suffer, despite the successes of the civil-rights movement?

Linguist and conservative pundit McWhorter (Authentically Black, 2003, etc.) recounts that when he was a youngster living in a leafy Philadelphia neighborhood, his mother would sometimes take the long way around to work to pass through the ghetto because “she wanted me to have a sense of how other black people lived and how lucky we were to be middle class.” Years later, North Philly is worse off, and so are most other black communities. The reasons are varied: Crack, AIDS and poverty have something to do with it. But more so, McWhorter asserts, do the legacy of the 1960s and the rise of what he calls “therapeutic alienation,” which is tantamount to surrendering to expectations of nonperformance. Though his arguments may lend themselves to mischaracterization in the coming debate—and this book is one long provocation to it—McWhorter takes pains not to oversimplify the case. Yet, he insists, his book is “one more in the line of arguments that poor blacks’ problems are primarily due to culture rather than economics.” Thus, it is a cultural matter that black workers of an earlier era took long bus rides to manufacturing jobs well outside their neighborhoods, whereas their counterparts today do not—never mind that the buses may not run, or that the jobs may not exist. It is a cultural matter that welfare was “the product of a system white leftists created that allowed blacks to realize the worst of human nature, in discouraging individual responsibility”—leftists such as LBJ and Moynihan, one assumes. In the end, dogma wins out, as McWhorter, the anti–Spike Lee, protests that never has a cab not stopped for him and opines that black Republicans “are different from black Democrats only in a spontaneous understanding that resonant catchphrases and buzzwords are not activism.”

Take that, Jesse. Whatever the merits of his argument, McWhorter is both fluent and fearless—and sure to catch hell.