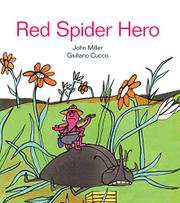 In the short information page that follows this artful, gladdening story, readers learn that spider mites are “smaller than the head of a pin,” which also makes them cousins to angels, and Harry couldn’t be much sweeter. As Miller dreamed him up (some 50 years ago and only now seeing the light of print), Harry has an itch to know what lies beyond his little patch of sidewalk. Harry’s grandfather is a wise old geezer sporting overalls, a pipe, and a boater who encourages Harry to live his wildest dreams in his head. When Harry declares he is running away, his grandfather says, “go right ahead, Harry. But it will take you more than a week to reach the end of the sidewalk.” OK, right, then he’ll stay there and become a famous hunter, until he considers the beasts’ poisonous fangs and spooky eyes. He’ll escape on the back of a flea and join a flea circus, and so on. After a series of further imaginary adventures, Harry sighs. He’s a little tired. “Now I must rest and play with my friends.” Harry may flag, but this tale won’t burn out, nor will Cucco’s illustrations, with their M&M colors and their shared aesthetic with William Steig, Jules Feiffer, and Quentin Blake.

Just so, a story that celebrates the dreams of even the smallest of us—the really, really smallest.