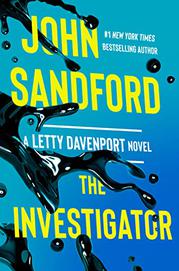 Veteran oilman Vermilion Wright knows that losing a few thousand gallons of crude is no more than an accounting error to his company but could mean serious money to whomever’s found a way to siphon it off from wells in Texas’ Permian Basin. So he asks Sen. Christopher Colles, Chair of Homeland Security and Government Affairs, to look into it, and Colles persuades 24-year-old Letty Davenport, who’s just quit his employ, to return and partner with Department of Homeland Security agent John Kaiser to track down the thieves. The plot that right-winger Jane Jael Hawkes and her confederates, most of them service veterans with disgruntled attitudes and excellent military skills, have hatched is more dire than anything Wright could have imagined. They plan to use the proceeds from the oil thefts to purchase some black-market C4 essential to a major act of terrorism that will simultaneously express their alarm about the country’s hospitality to illegal immigrants and put the Jael-Birds on the map for good. But they haven’t reckoned with Letty, another kid born on the wrong side of the tracks who can outshoot the men she’s paired with and outthink the vigilantes she finds herself facing—and who, along with her adoptive father, makes a memorable pair of “pragmatists. Really harsh pragmatists” willing to do whatever needs doing without batting an eye or losing a night’s sleep afterward.

Generations may succeed generations, but Sandford’s patented investigation/action formula hasn’t aged a whit. Bring it on.