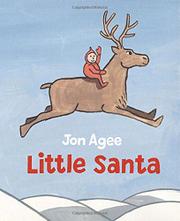 Santa’s origins are explained in this novel, quirky exploration of how Santa, the elves and the flying reindeer found their callings.

Little Santa is the youngest child of a hardworking family eking out a hardscrabble existence at the North Pole. The whole family, except for Santa, hates their hard life, and they decide they will relocate to Florida. When a major blizzard buries everyone inside, brave Santa takes his snowshoes and a sack of food and goes up the chimney to seek help. With perfectly reasoned logic, the text unfolds like a folk tale, with Santa finding everything he needs, such as a flying reindeer and talented elves who can make shovels and a sleigh. The elves climb aboard the sleigh to fly back to the North Pole with Santa, where they make themselves useful improving the homestead. Santa’s family moves to Florida the next winter after all, and “you know the rest of the story.” Agee’s polished prose has the ring of authenticity, and it’s a satisfying story that adults won’t mind reading again and again. The minimalist, cartoon-style illustrations use thick outlines and a muted palette except for Santa’s adorable, bright-red suit with pointed cap.

His red suit and his smile make little Santa stand out in his glum family, and this amusing story stands out in a similar way as a cheerful, original Christmas tale.