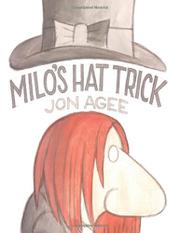 Agee displays his masterful drollery to particularly good effect in this tale of a semiskilled magician in need of a good trick. Milo is about to get heaved from the show, if he doesn’t stop botching the card tricks, and tangling the rope trick, and most of all if he doesn’t get a good hat trick going. He’s been using a mouse, which hasn’t impressed the crowds, so he retreats to the woods, where he tries to lure a rabbit into his hat. Instead, he attracts a bear. But the bear is a good soul and agrees to help Milo by hiding in the hat and popping out on command: “You just pretend your bones are made of rubber. It’s a secret I learned from a rabbit,” says the bear. Unfortunately, Milo grabs the wrong hat when he gets off the train back in the city, causing a major stir when the bear jumps out of the hat at the wrong place. The bear, though, is a crafty creature that ends up saving Milo’s bacon and even teaches him a trick or two, like jumping into a hat. “It’s a secret I learned from a bear,” Milo tells his admirers. A beautifully shaped story, symmetrical and decidedly odd and bright with laughter. The pacing and delivery are stage-worthy, as is Agee’s vastly expressive artwork, which is chockful of visual humor. (Picture book. 3-8)