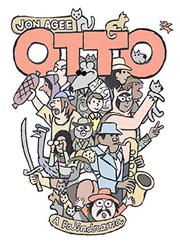 The panjandrum of palindromes crafts and collects some 200 examples to drive a picaresque graphic tale that (of course!) ends where it began.

Sure, the action is visually driven and most of the panels wordless—but from the initial “Mmm” to the concluding “Peep!” young Otto’s peregrinations are positively laced with well-placed palindromic dialogue, sound effects, signs, billboards, and labels. Ripples in a bowl of soup become a portal that lands the White lad on a beach. After various surreal sights (“Emus sail, I assume?”), he hitches a ride into a city crowded with passersby from “Regan Amy Trapp, party manager” to “Neil, a li’l alien,” then on to stores, a cemetery, and other stops before at last fetching up in his own urban backyard. Though he’s not above a “li’l” fudging (“Wanna potato pan? Naw”), Agee never breaks away from his premise, and he matches lines and locales with terrific ingenuity (at an art museum: “Even I’d order a red Rodin, Eve!” but “Gustav Klimt milk vats? Ug!”; a Robert Indiana–esque POOP sculpture is in the background). Astonishingly, somehow he keeps the plotline (more or less) coherent. Having drawn on the constructions of other palindromists to supplement his own, he readily shares credit in a closing note. The human figures in his palely tinted cartoons are mostly White, but some few have pale olive skin. (This book was reviewed digitally.)

A rare treat, backward and forward.