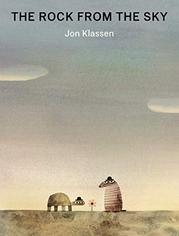 THE ROCK FROM THE SKY

In the first of five chapters, Klassen places his now-familiar turtle and armadillo (wearing bowler hats) on a minimalist gray/green landscape with one flower and—on the facing page—one plant. Personalities are revealed through occasional, slow movement across the gutter together with color-coded dialogue that feels as if it is being invented in the moment, sans script. Turtle is inflexible, not wanting to relocate, even when Armadillo moves farther away after a bad feeling about the space. It is only when Snake (sporting a beret) appears near the mammal that Turtle joins them—just in time: A huge asteroid falls on the vacated spot. Readers have watched it coming, suspense effectively building as they turn the pages. In subsequent episodes, Armadillo attempts to be helpful; miscommunication abounds; and Turtle is stubborn, proud, and jealous of the unspeaking snake, now near the rock: “I see how it is. Just enough room for two.” Turtle playing the martyr: “Maybe I will never come back.” As daylight turns into a striking, rose-tinged sunset and then a starlit evening, a life-zapping extraterrestrial (created previously in Armadillo’s futuristic forest fantasy) stalks Turtle. At the last minute, a second asteroid annihilates the creature. Klassen’s animals react to their seemingly absurd—but never tragic—universe with characteristically subtle, humorous postures and eye maneuvers. The weirdness of it all exerts its own attractive force, drawing readers back to it to wonder and ponder.

Waiting for Godot imagined for the playground population’s sensibilities.