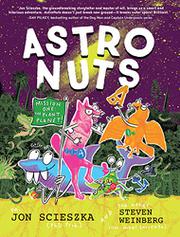 From the AstroNuts series, volume 1

The Not the National Aeronautics and Space Administration (also known as NNASA) has sent its four superpowered AstroNuts—bubblegum-pink fearless leader AlphaWolf, sunny tangerine SmartHawk, cool blue LaserShark, and lively lime-green StinkBug—into outer space to explore faraway planets. In their top-secret ship, which doubles as Thomas Jefferson’s nose on Mount Rushmore, they snot-rocket their way 39 light-years to the Plant Planet. Brimming with verdant vegetation, it looks like an ideal place to relocate Earth’s population due to climate change. But upon further investigation, they discover that the sentient, vegetal inhabitants have their own nefarious plans for the AstroNuts. Narrated by Earth, the tale treats middle-grade readers to a hearty dose of science facts that blend seamlessly with a hilarious narrative propelled by booger and fart jokes, making this a fun read-alike for fans of Aaron Blabey’s Bad Guys series. Climate change is presented accessibly, as is information about plant cell structure and basic chemistry, making this a must-have for those looking to boost STEM-related titles. The graphic-hybrid design is lively, blending varied typefaces and vivid colors alongside collage illustrations that incorporate images from the Rijksmuseum in Amsterdam.

A winning mix of fun and fact—readers will be eager for the next mission.