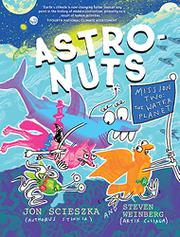 From the AstroNuts series, volume 2

The lovable aerospace animal assemblage returns in search of another hospitable planet for Earth’s inhabitants.

After striking out in their first mission (AstroNuts Mission One: The Plant Planet, 2019), the four agents of NNASA—LaserShark, StinkBug, SmartHawk, and AlphaWolf—are back to investigate another potential planet for Earth’s residents, this time with modifications that give each one a special power. Their ship, built from Thomas Jefferson’s nose from Mount Rushmore, rockets them to the Water Planet, where they meet its president, P.T. Clam. Brimming with hyperbole and effusive praise, P.T. bombastically extols his home planet and offers the AstroNuts to swap the Water Planet for Earth, promising to filter Earth’s polluted waters. Noticing the others’ reticence, P.T. quietly offers Mission Leader AlphaWolf a side deal appealing to his vanity. But soon, another clam named Susan B. Clamthony approaches LaserShark and sheds some light on P.T.’s true scheme. Narrated by Earth, this sophomore volume continues with all the same punchy puns and visual panache as its predecessor. Scieszka skillfully weaves in facts about climate change and environmental and social commentary into his jet-propelled zaniness, bringing a subtle undercurrent of relevance into a seemingly goofy tale. With its now-familiar collages utilizing a dazzling psychedelic array of color, the series will delight fans, although this volume is a fine jumping-in point for new readers as well.

A high energy follow-up proving silly can still be smart.