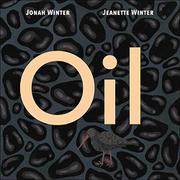 In 1977, the oil carrier Exxon Valdez spilled 11 million gallons of oil into a formerly pristine Alaskan ocean inlet, killing millions of birds, animals, and fish. Despite a cleanup, crude oil is still there.

The Winters foretold the destructive powers of the atomic bomb allusively in The Secret Project (2017), leaving the actuality to the backmatter. They make no such accommodations to young audiences in this disturbing book. From the dark front cover, on which oily blobs conceal a seabird, to the rescuer’s sad face on the back, the mother-son team emphasizes the disaster. A relatively easy-to-read and poetically heightened text introduces the situation. Oil is pumped from the Earth “all day long, all night long, / day after day, year after year” in “what had been unspoiled land, home to Native people // and thousands of caribou.” The scale of extraction is huge: There’s “a giant pipeline” leading to “enormous ships.” Then, crash. Rivers of oil gush out over three full-bleed wordless pages. Subsequent scenes show rocks, seabirds, and sea otters covered with oil. Finally, 30 years later, animals have returned to a cheerful scene. “But if you lift a rock… // oil / seeps / up.” For an adult reader, this is heartbreaking. How much more difficult might this be for an animal-loving child?

Like oil itself, this is a book that needs to be handled with special care.