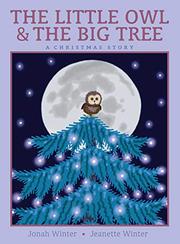 THE LITTLE OWL & THE BIG TREE

This true story follows a tiny owl whose home becomes the Christmas tree at Rockefeller Center.

She is a northern saw-whet owl, a nameless wild animal, so tiny that “it’s doubtful anybody knew she existed.” She sleeps by day and hunts by night, alone and peaceful—until one day the sounds of voices and power tools awaken her. Her tree moves. It shakes. It falls down. It is wrapped, loaded onto a truck, and driven for hours down a noisy highway. When the truck stops, there are new sounds, and when the tree is unwrapped, the owl comes out of her hole, tired and hungry from three days without food. She is found and brought to a wildlife rescue center, where she is nursed back to health. Meanwhile, her tree is decked with lights and put up in New York City. The owl is now famous, and she has been named Rockefeller—but of course she doesn’t know about that. When she is well, she is released into the wild. Jeanette Winter’s signature illustrations center the owl and her natural habitat even as the text straddles the human perspective on the owl’s world in a way that makes each strange to the other. This story poses as many questions as it answers, leaving readers to discuss and wonder at the relation of wilderness to civilization. (This book was reviewed digitally.)

An intriguing episode of colliding worlds.