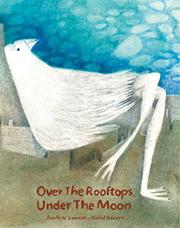 OVER THE ROOFTOPS, UNDER THE MOON

An individual’s relationships to self and community are pondered in this metaphorical outing.

“You can be far away inside, / and far away outside. / With others, but still on your own.” Smudgy, mixed-media paintings use negative space to depict a long-legged bird that’s the off-white of the mottled paper. It leans against a chimney, soars over a city, lounges with others of its ilk. As Lawson’s second-person text continues, the bird begins to interact with the city’s people, its feathers taking on colors and patterns worn by the diverse human residents. It rides a roller coaster with the humans as its flock takes wing. “But then snow falls / and something changes again.” As the humans don their winter coats, the bird flies from the icy climes to another city, with archways and palm trees, where it rejoins its flock, “alone and together / over the rooftops / and under the moon.” Iranian-born Kazemi’s illustrations are as porous and open to interpretation as Lawson’s text. The bare bones of the visual story are accessible to children who have begun to understand the fundamentals of migration, but they are also, appropriately, enigmatic. Children beginning to understand that they are separate from those who surround them will sense the emotional truth that underpins both pictures and text even if they cannot yet articulate it.