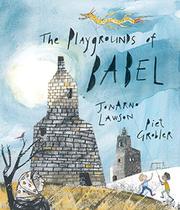 THE PLAYGROUNDS OF BABEL

A new take on the Babel tale featuring friendship, song, and a dragon.

Two children on a playground overhear an old woman telling a story. Since one child doesn’t understand her language, the other takes on the storytelling. The story differs from what the listener—and perhaps readers—is familiar with: After the people of Babel build their tower, “God sent a dragon to destroy the tower, and then God made it impossible for people to understand each other—by making new languages for everyone.” The translating child continues, describing how sudden linguistic barriers did nothing to dim the friendship between two young girls of Babel. Through song, the two discovered how to communicate once more. Conveyed entirely through dialogue, back-and-forth questioning between listening child and translating child moves the action forward but also prompts musings on belief and story. “None of it is realistic. It’s a story, not reality.…No one’s asking you to believe, just imagine.” Grobler’s mixed-media work illustrates the narrative layers. He sticks primarily to an inky palette for the playground action while illuminating the Babel tale with bright watercolor and colored pencil. Just as the skeptical child concedes, “That sounds realistic,” the illustrator injects color into the playground. Languages are denoted by different symbol sets rather than lettering, and the cast of characters is diverse in skin color and dress, including both pairs of friends.