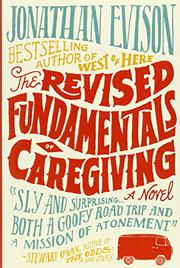 THE REVISED FUNDAMENTALS OF CAREGIVING

Evison manages to find considerable humor in this plaintive story of care giving and receiving.

Narrator Ben Benjamin is greatly in need of caregiving himself, so he doesn’t have much left for Trev, his adolescent charge, who has Duchenne Muscular Dystrophy and is confined to a wheelchair. Ben has learned everything about his job from The Fundamentals of Caregiving, a book generous in providing acronyms meant to be helpful (for example, ALOHA: Ask Listen Observe Help Ask again) but scanty in providing practical advice. He takes the job of caring for Trev because—well, frankly because he’s broke, he’s responsible for a family tragedy, and his wife has left him, so the minimum wage job has a desperate appeal. Ben finds that providing care for Trev helps give his life some purpose. Trev’s father, Bob, had deserted his family years before, shortly after the diagnosis of MD was made, but he’s now making some attempts to get back in touch with his son, though Trev resolutely rebuffs him. Then Elsa, Trev’s mother, finds out that Bob has been in a car accident in Salt Lake City, and against her wishes, Ben decides to take Trev on a road trip to see him, a trip that becomes more an end in itself than a means to see how Bob is doing. Along the way from Oregon to Utah they pass through towns, pick up Dot, a punky but goodhearted girl, befriend Elton and his acutely pregnant girlfriend, Peaches, and are followed by a mysterious man in a Skylark. Ben expects the mystery man to be a private detective his estranged wife has set on him, but he turns out to be someone quite different.

A lively narrative with a poignant core and quirky, lonely characters.