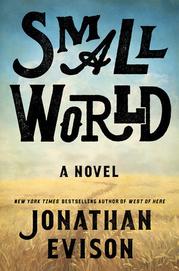 A train accident reveals the connections among a host of people across race, class, history, and the country in this ambitious epic.

Evison’s seventh novel opens by giving away the climax: Walter, a train operator working his final run for Amtrak, is at the center of a wreck on the way to Seattle. But despite making the worlds-in-collision setup clear early, Evison has still crafted a suspenseful novel, as he shuttles between the train’s riders in 2019 and their forebears in the 1850s. Walter is a descendent of Nora and Finn, Irish twins orphaned in Chicago. Malik, a rising high school basketball star, is a descendent of George, an escaped slave. Jenny, a hard-charging corporate fixer (she supervised Amtrak buyouts that, it’s implied, led to the crash), descends from Wu Chen, a Chinese immigrant who parlayed a small stash of gold into a thriving business. And Laila, escaping her abusive husband, is descended from Luyu, a Miwok woman who’s absorbed White people's condescension or brutality. Bouncing among the characters in brief chapters, Evison gives the story a sprightly, page-turner feel despite the sizable cast he’s assembled. And the story thrives because his eye for the particulars of each character’s life is so sharp: Finn’s work on farms and railroads, Laila’s anxiety over escaping her husband, Malik’s mother’s desperate efforts to make ends meet for her son’s sake. So when their lives do wind up intersecting on the train, Evison’s novel feels less like we’re-all-connected sentimentality than a compassionate vision of a pluralistic country that ought to dignify everybody. Though politics aren’t explicit in the novel, it’s plainly a response to an era that’s created dividing lines across the country. Without being simplistic or wearing rose-colored glasses, Evison suggests a fresh way of recognizing our relationships without melting-pot clichés.