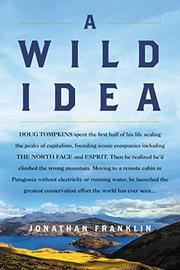 Investigative reporter Franklin recounts the life of the free-spirited millionaire entrepreneur who used his fabulous wealth in the fight to save nature.

One constant in the epic life of North Face founder Doug Tompkins (1943-2015) was his enduring love of the outdoors. The son of a successful antiques dealer, he grew up in the countryside of Millbrook, New York (Timothy Leary was a neighbor), where he cultivated his love of the natural world. His contrarian ways eventually led to his expulsion from high school just weeks before graduation. Tompkins headed West, where he baled hay in Montana, raced Olympic skiers in the Rockies, and took up rock climbing in California. He also “hitchhiked by airplane throughout South America.” Tompkins ended up in San Francisco, where, by the mid-1960s, the skiing and climbing supplies business he started with the help of Patagonia founder Yvon Chouinard suddenly began to boom. He was a charismatic businessman, and every one of his ventures after that—from his wife’s Plain Jane dress company to his own Esprit clothing brand—was successful. But his Midas touch never changed his passion for travel and adventure—e.g., flying his Cessna, sometimes with his family, but often, to the detriment of his marriage, solo. In the early 1990s, Tompkins bought property in southern Chile and fell in love with its pristine beauty. His outrage over the resource extraction–based nature of the Chilean government’s policies fueled his desire to protect the land. In the years that followed, he became an outspoken, sometimes reviled conservationist dedicated to using his fortune to transform thousands of acres of Patagonia into national parks. The great strengths of this timely, well-researched book lie not just in the author’s detailed characterization of Tompkins’ complex personality, but also in the celebration of his singularly dynamic crusade to save the environment.

A satisfyingly heartfelt tribute to a thoroughly remarkable man.