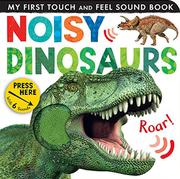 From the My First Touch and Feel Sound Book series

What sounds did dinosaurs make? We don't really know.

Litton suggests some possibilities while introducing sophisticated vocabulary in a board-book format. Five dinosaurs are featured: Tyrannosaurus rex, Stegosaurus, Pterodactyl, Diplodocus, and Triceratops. For each species there is a brief description that highlights its distinctive features, followed by an invitation to hear and repeat the dinosaur's sound. There is no explanation for why scientists think T. Rex “roared,” Stegosaurus “howled,” Pterodactyl “screeched,” Diplodocus “growled,” or Triceratops “grunted.” The author tries to avoid sexism, carefully referring to two of the creatures as “she,” but those two are also described in stereotypically less-ferocious terms than the male dinos. The touch point on the Pterodactyl is a soft section of wing. Readers are told that Diplodocus “loved splashing in swamps,” and the instruction is to “tickle her tummy to hear her growl,” implying that this giant creature was gentle and friendly. None of this may matter to young paleontologists, who will enjoy finding the tactile section on each creature that triggers the sound. Despite extensive directions in small print, most parents and libraries won't bother to change the battery secured by a tiny hex screw, but while the battery lasts, the book will get lots of play.

Young dino fans will enjoy it, though their grown-ups may not.