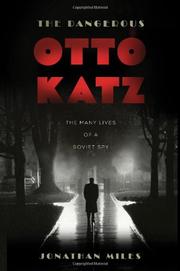 The Many Lives of a Soviet Spy

A talented and seductive spy pops up in places as diverse as Hollywood, Prague, Paris and Mexico City, organizing anti-Nazi, pro-Communist propaganda before dangling at the end of a hangman’s noose in 1952.

Miles (The Wreck of the Medusa: The Most Famous Sea Disaster of the Nineteenth Century, 2007, etc.) presents a complicated tale of espionage, human cruelty, war and retribution. The author begins in 1952 when Noël Coward, one of Katz’s numerous celebrity acquaintances, discovered that Katz, having outlived his usefulness, was on trial for treason in Prague. After dealing swiftly with this classic Communist-era show trial, Miles returns to 1895 and the birth of the Jewish Katz in southern Bohemia. The author digs up what he can (not much) on Katz’s boyhood and education, showing how he fell in love with socialism in his mid-teens, got caught up in Prague’s theater and art world, met Kafka and began to come of age. A handsome, slick operator, he was soon at work in publications and propaganda. Along the way he associated with some of the era’s most notable writers, artists and actors, including Dietrich, Koestler, Dos Passos, Hemingway and many others. Security services in France, England and the United States were watching him, though never very efficiently. His multiple aliases, smooth demeanor and celebrity connections seemed to shield him from surveillance. Miles properly credits him for exposing the cruelties of the Nazis, and he also charts Katz’s growing discomfort with the brutalities of Stalin—though he stayed ever loyal to the Communist Party. The author also suggests that the Kennedy assassination was a conspiracy and that Britain’s MI5 comprised a collection of bungling boobs.

An intriguing spy biography that ably demonstrates how fierce adherence to an ideology can lead to human suffering on terms both intimate and global.