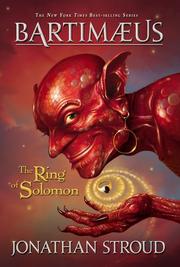 THE RING OF SOLOMON

From the Bartimaeus series, volume 4

The entertainingly cocky djinni scraps his way through a 950 BCE escapade mostly unrelated to his series (The Bartimaeus Trilogy) but in that same metaphysical world. Any competent magician can summon Bartimaeus to Earth and enslave him, though none can suppress his amusingly snide commentary (complete with witty footnotes). Assigned to chase bandits outside a corrupt Jerusalem, he meets Asmira, a young woman whose third-person-limited narrative sections are told in a reserved, pragmatic voice. She treks to Jerusalem on a mission to assassinate King Solomon, who threatens her country of Sheba. Magical detonations enhance the tension as Asmira creeps closer to King Solomon and his world-controlling ring. Semi-success in her quest raises new questions, expanding her worldview and making her think in new ways. Despite Asmira’s likability, copious action and suspense, the text’s sharp elegance and Bartimaeus’s funny panache under duress, the prose moves slowly throughout, partly due to over-description. Best for worshippers of popular Bartimaeus and fantasy readers who don’t require a quick pace. (Fantasy. YA)