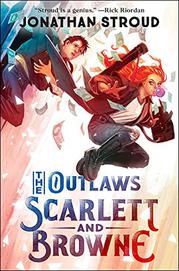 THE OUTLAWS SCARLETT AND BROWNE

It’s a land of wilderness and often radioactive ruins, with remnants of humanity in scattered walled towns huddling for protection against crazed, cannibalistic Tainted roaming the woods and ruthlessly culling anyone with even minor mutations under the direction of magisterial Faith Houses. Scarlett McCain, professional thief, initially thinks the uncommonly persistent, bowler-hatted gunmen are after her for her last bank robbery—but soon realizes their quarry is actually Albert Browne, a strangely secretive and ingenuous lad she impulsively pulled from a blown-up bus. What makes him so valuable? The answer, coming through hails of gunfire, massive explosions, narrow escapes galore, and encounters with terrifying monsters (not all of them nonhuman) on the way to a desperate climactic struggle in the immense concrete archipelago of London revolves around a secret prison where children with special mental abilities are kept, tortured, and trained for purposes unknown. If Scarlett turns out to be formidable in the crunch and Albert not so much, by the end the two have not only bonded, but proven to have complementary abilities that bid fair to serve them well in future exploits. The vivid setting, rapid-fire dialogue, and nonstop action will propel readers through this raucous, rousing rumble. The cast presents White.

A blast for action fans, with potential for a long run.