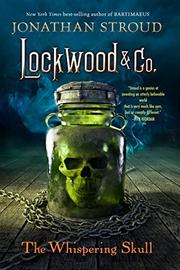 From the Lockwood & Co. series, volume 2

An occult portal and its spectral guardian nearly cut short the careers of three rising young ghost hunters in this madcap sequel to The Screaming Staircase (2013).

Continuing their predilection for falling into predicaments that require rapier work and fast exits, psychic detection agents Lockwood, George and Lucy are reluctantly hired by Scotland Yard to track down a mystical old “bone-glass” no sooner found in the arms of a moldering exhumed corpse than stolen. As everyone who has looked into this small but potent artifact seems to have either been driven insane or eaten by rats (or both), police and psychic black marketeers are equally eager to get their hands on it. In fine form, Stroud sends Lockwood & Co. on a trail that leads from an upper-crust social event to the mucky margins of the Thames and into dust-ups with thugs, rival agents and carloads of ectoplasmic horrors that can kill with just a touch. Lucy’s cautionary “If you’re easily icked-out, you might want to skip the rest of this paragraph…” goes for more than one grisly passage. For all their internecine squabbling, the three protagonists make a redoubtable team—and their supporting cast, led by the sneering titular skull in a jar, adds color and complications aplenty.

Rousing adventures for young tomb robbers and delvers into realms better left to the dead.