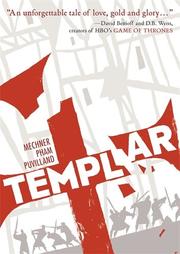 A sweeping medieval caper set amid the persecution of the Knights Templar during the early 14th century.

After righteously serving Christendom during the Crusades, the Knights Templar returned from the Holy Land and faced their new reality as a powerful army that answered only to the pope yet operated in lands ruled by kings. Mechner (The Making of Karateka, 2012, etc.) unspools their downfall—the result of trumped-up charges orchestrated by Nogaret, chancellor to the king of France, who is determined to seize the vast treasure the Templars have hidden in their Paris temple—by following the order’s less pious members. Boozing and lust keep a trio of knights, led by valiant Martin of Troyes, out of the initial sweep that imprisons nearly the entire order. Martin goes on to lead a ragtag team of Templar misfits on a quest to decipher the location of the treasure and spirit it away before Nogaret can claim it. The sprawling, often circuitous tale features a large cast of characters and a rich historical setting, but the two elements don’t fully mesh, both settling at the depth of a Hollywood blockbuster. Few Templars resist the outrageous persecution, and their limp response is addressed only in a remark by their browbeaten grand master: “In this new world there is no place for men like us.” The sentiment is poignant but largely unexplored, and the lack of fight from the Templars—who are, by all accounts, fierce warriors—gives the story an odd hollowness that undercuts its rousing third act. Illustrators Pham (The Boy Who Loved Math, 2013, etc.) and Puvilland (Solomon’s Thieves, 2010, etc.) imbue the book with a sketchy beauty that feels akin to the work of Guy Davis, though the influence of Puvilland’s role at DreamWorks Animation is also apparent. The art’s small details are the best, like a flung canteen frozen in midair, windblown shrubs on a lonesome street, a long-imprisoned Templar shielding his eyes from the sun, or the tilted head and closed eyes of a distant kiss.

An explosive but overly wound clockwork whose center doesn’t hold.