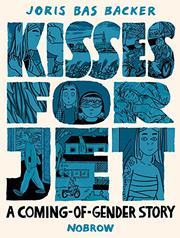 It’s 1999, and Jet is exploring their identity.

As tweens, Nirvana fans Jet and Sasha meet and strike up a friendship. At 16, Dutch Jet is experiencing the confusion of puberty and coming to terms with their sexuality and evolving gender. With their parents in Brussels working on fixing the millennium bug, Jet is sent to a boardinghouse with other students from their international school. Bullied by fellow boarder Stef, Jet navigates friendship, a first kiss, and experimenting with their gender presentation in the lead-up to the new millennium, but they’re not without support, as both Sasha and new kid Ken have their back. Charming moments, such as Jet’s pasting together images of themself and Kurt Cobain to explore their gender, contrast with incidents such as Jet’s binding unsafely using a bandage. Given the emphasis on genitals by transphobic elements in society, the lack of context in two scenes in particular is troubling: one in which Jet attempts to urinate standing up, with panels showing close-up frontal images of their genitals, and two ambiguous lines of dialogue that may be intended to signal that Jet is intersex. The muted color palette of mostly blue with the odd splash of pink serves to represent Jet’s feelings about their gender. This work is a mixed bag that will provoke strongly different reactions in readers.

A story about gender that is sure to elicit controversy among its target audience.