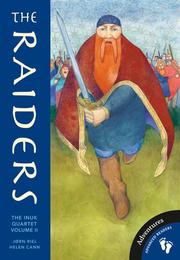 From the Inuk Quartet series, volume 2

The second episode in the Danish author's Inuk Quartet sends young Icelander Leiv and his Inuit friends on a new mission of vengeance after Viking raiders plunder his newfound Greenland home.

They have spent an idyllic spring and summer recovering from the trek in Shipwreck (2011); it's been interrupted only by a quick clash with a longship captained by the brutal Thorleifsson brothers. Now, Apuluk and Narua set out to rejoin their nomadic clan with Leiv in tow. That friendly visit turns into a punitive expedition after the Thorleifssons massacre most of a native settlement and loot Leiv's new home. The translated narrative reads smoothly, and high production values result in a handsome, open page design. Its visual appeal is enhanced by Cann's stylized but crisply drawn and richly colored images of arctic wildlife and fur-clad human residents. Though wordy descriptions of seasonal cycles and farm life slow down the first several chapters, the pacing picks up on the way to a violent climax, gory ends for the bad guys, and (pointing to developments in volumes to come) Leiv's decision to explore northward in search of a land route to fabled Vinland.

Not a stand-alone, unlike the opener, but still a worthy tale built around a core of clashing cultures and shared human values.