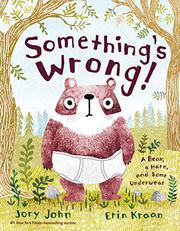 A Bear, a Hare, and Some Underwear

A chatty bear causes a stir in the forest by leaving the house in an embarrassing pair of white underwear.

When Jeff the bear runs down a checklist of things to do before leaving the cottage in the morning, one big item is forgotten: taking off the tighty whities that Grandma sent. As Jeff encounters pal after pal (none of whom wear underwear, nor indeed any human clothing), the bear has a sense that something is very wrong. But what could it be? Finally, after many animals break the fourth wall to ask readers, “Why is that bear wearing underwear?” Jeff goes to a rabbit friend named Anders who explains. And while there’s a huge moment of awkwardness when all the animals show up, Anders and Jeff are able to seize the moment. The underpinnings of this charming picture book are already strong (underwear is inherently funny), and the babbling small talk Jeff engages in while trying to figure out what’s wrong adds a lot to the increasingly silly situation (“Am I right or am I right? I think I’m right”). John’s text perfectly pitches the jokes to a strong conclusion at just the right pace while Kraan’s energetic illustrations, with hardly a straight line in the entire book, add to the sense of ultimately harmless cringe. The book is also a clever primer on handling embarrassment and how it can sometimes be dealt with by simply changing the perspective of what’s happening. (This book was reviewed digitally.)

This underwear affair is wise, witty, and just brief enough.