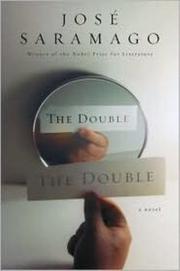 The theme of shared identity, treated by such masters as Poe, Stevenson, and Dostoevsky, animates the 1998 Nobel winner’s latest.

Protagonist Tertuliano Maximo Afonso is a divorced high-school history teacher whose life is irretrievably altered when he watches a videotaped romantic comedy recommended to him by a colleague. An unidentified supporting actor in the film is the image of Tertuliano himself, five years earlier. Obsessed by the coincidence, Afonso scans more and more films, identifies his “double” as journeyman actor Daniel Santa Clara, and learns the performer’s real name: Antonio Claro. Through the breathless hurtling lengthy paragraphs that are Saramago’s trademark, we watch the timid academic unravel as he contacts Claro (through a letter Tertuliano signs with the name of his sometime sweetheart Maria de Paz), meets the actor at the latter’s home (in a very amusing scene, during which the two physically identical men even examine each other naked), and—in a melodramatic climax reminiscent of “Santa Clara’s” movies—undergoes a climactic exchange of identities, which Saramago caps with a bold surprise ending. The Double hums with imaginative energy, and intrigues both by its central mystery and by its author’s playful habit of assisting the reader (“Tertuliano’s . . . next actions . . . demand the information that today is a Friday,” etc.). But its points about the fragility and instability of individual identity are easily made, and there’s a redundancy to many of its scenes that puts it at a level just below that of such Saramago masterpieces as Blindness (1998), All the Names (2000) and, most recently, The Cave (2002).

Nevertheless, it’s clearly the work of a great writer, whose entire oeuvre eloquently dramatizes the paradox (memorably stated by Maria de Paz) that “Chaos is only order waiting to be deciphered.”