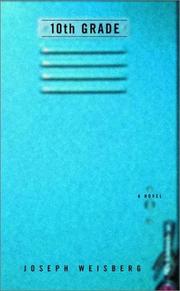 Weisberg’s debut chronicles a high school sophomore’s life in the first-person, with obvious echoes of The Catcher in the Rye.

Jeremy Reskin, however, is no Holden Caufield. He’s quite sweet, for starters; rather than acidly appraising everyone he knows as “phony,” he’s more likely to tell us that the handsome boy on the baseball team is “a solid good guy. Even in the halls he’s nice to people.” Jeremy plays soccer and fits in pretty well. Though in the fall he hangs out with a group of rebels, he won’t smoke pot with them (“I felt like saying, ‘Sorry I don’t want to kill all my brain cells and probably get arrested some day’”), and he seems better suited to the popular clique that takes him up later in the school year. Sure, he has to settle for just being friends with gorgeous new girl Renee Shopmaker (he finally gets high with her and her hip art-dealer uncle), but second-most-gorgeous Lenea Vovich doesn’t seem like such a comedown to make out with after the prom. Jeremy actually likes his hometown, Hutch Falls, New Jersey (“It has many of the advantages of the city like restaurants and culture but also has low crime and other problems like dirt”), and his parents may annoy him but Mom can really cook and Dad’s kind of an endearing old holdout against the consumer culture Jeremy can’t be bothered to reject. Our hero’s grades aren’t so hot, he spends a lot of time commenting on girls’ Breasts (always capitalized), and he occasionally uses the F-word, but he’s basically a good kid who does a certain amount of growing up in tenth grade: “I learned many lessons like be yourself and let your heart shine.” Nothing wrong with that, but nothing very dramatic about it, either.

Quite a concept: A nice teenager. Parents will be relieved, but fiction without conflict makes little impression.