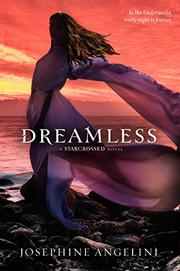 Real sexual tension apparently requires all the divine forces in the universe be arrayed against you, if this book is any guide.

Demigods and erstwhile lovers Helen and Lucas can never be together, because they're secretly first cousins. Just in case the couple realizes that relationships between cousins aren't considered incest in their home state of Massachusetts (or 24 other states in the union), Lucas's father explains that the future of the demigod species, nay, of the entire planet depends on the couple staying apart. Because! Of history! And magical things! And could Lucas just stop being so selfish? Lucas responds by pretending to hate Helen, following the standard tortured-angsty-boy recipe for staying away from his girlfriend. Poor Helen, meanwhile, is spending all her sleeping hours traveling the Underworld. She hopes to defeat the Furies and end the senseless feuding that has tormented the semi-divine Scions since the Trojan War, but she can't seem to make any headway in the blasted hellscape of the Underworld. Not to mention, her magical journeys are keeping her from REM sleep, thus probably killing her. At least she's met a hot new Scion in the Underworld to fill the vacancy Lucas left by being such a meanie.