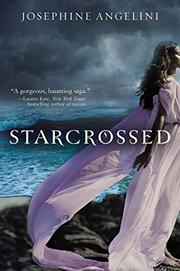 What if Bella Swan were a demigod?

Helen is the loveliest girl on Nantucket, but until the sexy Delos family comes to the island, she's always tried to stay under the radar. It's not just her looks that attract attention; Helen knows her strength, speed and hearing all approach superpower levels. But she can't stay hidden in the presence of the Delos cousins, Jason, Hector, Cassandra, Ariadne and the sexiest one, Lucas—yes, Lucas. (Some complicated handwaving explains why he is named Lucas instead of—as was intended—Paris.) Readers trained on trendy Greek mythological fantasy won't be surprised to learn both Helen and the newcomers are demigods. In their blonde beauty (really!), they look exactly like their quasi-mythological ancestors and are cursed by the Furies and the gods to replay ancient dramas across history. Lucas and Helen are both drawn together and forced apart by fate and desire. The cousins, meanwhile, help Helen develop her powerful demigod abilities while tutoring her on the massive forces arrayed against her. Though weirdly inconsistent perspective, startling shifts of voice and scenes that feel like they've been copied almost directly from Twilight break the flow, the drama's epic scale complements the love story's pacing. A refreshingly strong heroine carries readers into the setup for book two.

Teens who have outgrown Percy Jackson and moved into the paranormal-romance phase won't mind the amateurish prose; they'll be caught up in the we-must-we-can't sexual tension. (Paranormal romance. 13-15)