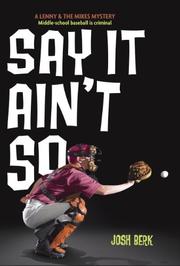 SAY IT AIN'T SO

From the Lenny & the Mikes series, volume 2

The second installment in the Lenny & the Mikes mysteries finds Lenny Norbeck and his friends Mike and Other Mike in seventh grade with a new case to solve.

Though starting catcher Davis Gannett has been kicked off the team for stealing a cellphone, and Mike has taken his place, Davis keeps showing up at games. As the season goes on, Lenny discovers that another team, Griffith Middle School, is stealing the catcher’s signs, allowing their hitters to know what pitches to expect. So when pitching star Hunter Ashwell starts losing games, panic is in the air, and Lenny has a new mystery to solve. It’s not as dramatic as the murder mystery of the series opener, Strike Three, You’re Dead (2013), but Berk delivers important life lessons wrapped up in a satisfying story of baseball and friendship. What are the costs of solving crimes? Would he rather be “the Sherlock Holmes of suburbia” or just a friend? What if doing right turns out to help the boy nobody likes? These common middle school moral dilemmas are treated realistically in the believable context of baseball as a metaphor for life.

Lenny is thrown several curves as he solves the mystery and finds a deeper appreciation of what it means to be a friend in this satisfying caper.