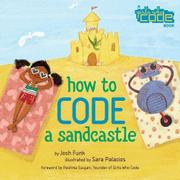 HOW TO CODE A SANDCASTLE

A girl named Pearl programs a (rust-proof) robot to help her build sand castles in this new addition to the Girls Who Code organization’s book program.

The last day of summer vacation is Pearl’s last chance to build a sand castle. All her prior attempts have fallen victim to comic mishaps (such as a “moat” contributed by dog Ada Puglace). For backup, she brings her robot, Pascal, with whom she breaks down the full task—building the sand castle—into small problems: finding a place to build via specific instructions, gathering sand via a sequence (and more efficiently with a loop), and decorating the castle via an IF-THEN-ELSE statement. After she works out the kinks, the oncoming tide throws Pearl for a new loop—literally, as she reuses her previous computer code while adding a moat feature to handle the tide. The cheerful mixed-media illustrations and warm color palette fit both the subject matter and the can-do spirit of the book. The computer science terms are demonstrated in clear, concise ways, allowing them to be mined for humor (such as Pascal’s attempts to place the sand castle in unsuitable places until Pearl learns to be very specific), and serve the story without feeling obtrusive or too much like lessons. The backmatter gives fuller explanations of the terms. Pearl has brown skin and textured, black pigtails, and the other beachgoers are racially diverse.

An accessible introduction to coding rules that also easily entertains.