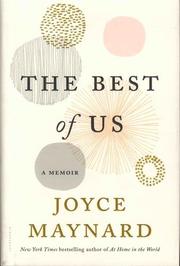 THE BEST OF US

An acclaimed novelist recounts how a brief late-life marriage taught her the meaning of partnership.

Maynard (Under the Influence, 2016, etc.) was a successful single woman in her late 50s who was “done with marriage” when she met Jim, a divorced San Francisco lawyer, on Match.com. Fit and handsome, Jim looked like he was “probably a Republican.” But from their first open-hearted conversation, Maynard knew he was different. Still, caution ruled her actions. She had been independent and casually dating for more than 20 years and “wasn’t sure I should try love anymore.” However, the more time she spent with Jim, who accepted and loved the foibles other men had not, the more she realized that he was her “long-awaited sweetheart.” He was the brave and loving “guard dog” who could give her the “big love” she had always wanted but never found. For the next year, they lived in a state of perpetual bliss. Nothing—not even past romantic and personal failures and family tensions—seemed to cast a shadow on their happiness. They married less than a year after they met and bought a beautiful home together, where they envisioned a future that included visits from grandchildren and harvesting olives from trees they would plant. Then, a year after they wed, doctors diagnosed Jim with pancreatic cancer. For the next 19 months, they embarked on a roller-coaster ride that took them from the pinnacle of hope to the depths of despair and finally to painful acceptance of Jim’s inevitable demise. Told through loving, minutely remembered details that celebrate a once-in-a-lifetime love, the narrative, which only occasionally descends into overly sappy territory (“tourists in the country of love”), immerses readers in a story that, even at its darkest, strives to find meaning in calamity, heartbreak, and loss.

A moving tribute to the evergreen lessons of the heart.