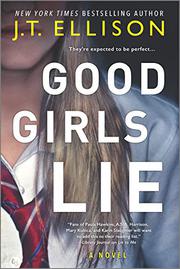 After the gruesome deaths of her parents, a 16-year-old English girl sets a terrifying string of events in motion when she moves to Virginia to attend an elite all-girl prep school.

When coding whiz Ash Carlisle  gets a scholarship to The Goode School in Marchburg, Virginia, she’s anxious to leave England, and a trove of bad memories, behind. After all, her abusive father’s death by overdose and her mother’s subsequent suicide would traumatize any child. Ash is determined to keep her head down and her grades up, with an eye toward college. However, her accent and outsider status paint a target on her back, and she soon catches the eye of haughty and beautiful Becca Curtis, a senior who rules the school with near impunity. But Ash intrigues Becca, and it’s not long before Ash’s social standing takes a turn, and she’s inducted into Ivy Bound, Becca’s secret society. Unfortunately, Ash’s hope for a new beginning starts to unravel when her roomie, Camille, takes a fatal header off the bell tower and dark secrets from Ash’s fraught past, including the circumstances surrounding the deaths of her parents, start clawing their way to the surface. Ellison throws in all the elements of a good gothic: a school history chock full of murder and mayhem; secret societies; and halls rumored to be haunted, but Ash swings wildly from sympathetic to insufferable. Readers cheering her devil-may-care attitude and initial resistance to mean-girl shenanigans will be frustrated to see her eventually groveling at the feet of Becca and her cronies, especially after the cruel hazing they put her through. Ellison juggles multiple narratives that weave past and present with ease, but with the book approaching 500 pages, readers may be exhausted from all the melodrama once they finally reach the messy, over-the-top denouement.