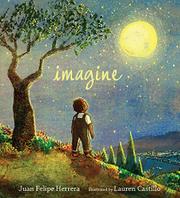 Former Poet Laureate Herrera encourages his young readers to imagine all they might be in his new picture book.

Herrera’s free verse tells his own story, starting as a young boy who loves the plants and animals he finds outdoors in the California fields and is then thrust into the barren, concrete city. In the city he begins to learn to read and write, learning English and discovering a love for words and the way ink flows “like tiny rivers” across the page as he applies pen to paper. Words soon become sentences, poems, lyrics, and a means of escape. This love of the word ultimately leads him to make writing his vocation and to become the first Chicano Poet Laureate of the United States, an honor Herrera received in 2015. Through this story of hardship to success, expressed in a series of conditional statements that all begin “If I,” Herrera implores his readers to “imagine what you could do.” Castillo’s ink and foam monoprint illustrations are a tender accompaniment to Herrera’s verse, the black lines of her illustrations flowing across the page in rhythm with the author’s poetry. Together this makes for a charming read-aloud for groups or a child snuggled in a lap.

A lyrical coming-of-age story in picture-book form that begs to be shared.